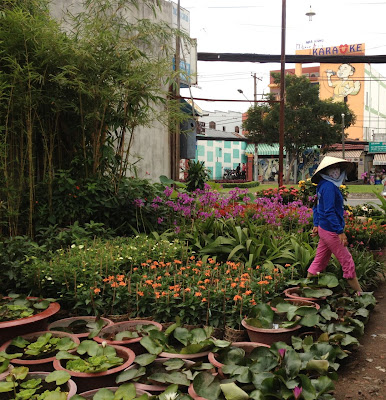 It surprises me how few words we actually need to get by.
One week into life in Vietnam and my vocabulary seems
to have been reduced to a few simple words.
Yes? No? and Ok? 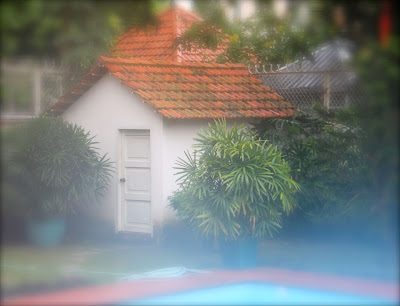 In fact, eye contact, hand movements and utterances
can do the trick just as well. Yesterday, I found myself in our little pool house
with Mr. Truan, the gardener, who does not speak English. We were both
deep in thought pondering the state of the fuse box. He was pointing and saying 'broken'.

I was thinking back to the weekend when I had flipped through the
switches like a percussion stick on a xylophone...back and forth
until the water jets on the jacuzzi were at the perfect rhythm.
I was also thinking about the 'boom' sound as a result of my fuse box wizardry.

I had to find a way to convey the results of my actions and chose the easiest way I knew.
I smiled, pointed at one of the motor contraptions behind me and said
"Vroom, Vroom- Boom- Yes? Ok?"

Did I feel like an idiot?
Yes- but it got the point across and this became apparent when his quizzical brow
dropped and he smiled and said 'Yes, Ok, Boom... No, No' as he pointed at
the fuse switch that said 'Massager'. I took that to mean that I should not use
the 'Massager' switch and replied 'Ok, Yes'. Mission accomplished..we communicated.

This is the first time I have lived in a country where I do not speak or understand
the native language. I had no idea what I was getting myself into.
My days have been spent on the receiving end of a revolving door of servicemen.
In the compound where we live, they do not send one man to do the job..
they send several and they spread them out over a few days. The odd thing is
that they all look after the same problem, it is as if they are telling one after another
to check on the work of the previous serviceman. There I stand with my few words, explaining
the same thing to five different men who barely understand me. I point and talk very slowly
and they point and talk very fast. I am working hard to keep my wits about me.
Simplify, Simplify, Simplify 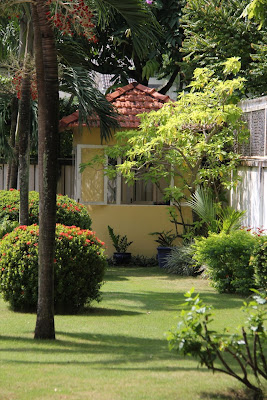 On the other hand...
I am truly enjoying getting to know the staff associated with the house.
The driver, Mr. Khai took me on a tour of the local garden shops today. I noticed
that he and the gardener take great pains to make the garden look as neat
as possible. I have also noticed that they have divided nearly every plant on the
property at least a dozen times. I decided it was time to add new specimens
to the landscape..much to the delight of both Mr. Truan and Mr. Khai. 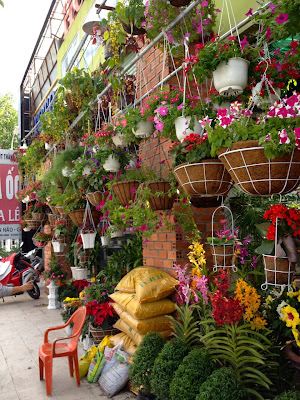 In the midst of our travels, Mr. Khai asked about our life in England.
"Did we live near the Chelsea Football Club?"
In fact we did, and when I mentioned it, there were squeals of delight..he is an avid fan.
He asked about our garden in England and with that I mentioned
my visits to the Chelsea Flower Show. All I can say is that I have never heard a grown man
so enthusiastic, so excited over a flower show, it was one of the most precious moments of my experience to date and am sure it will be right up there when I look back on my time here.
I promised I would show him and Mr. Truan my photos from the show.
I wonder what they will create as a result?

On that note..here a few pics from our travels today.
I have added colour to the garden and absolutely fell in love
with the Bonsai plants which I refrained from purchasing.
I have my eye on a few water features as well.
I plan to embrace the mango (house colour) and go
for the full experience. There will be no holding back! 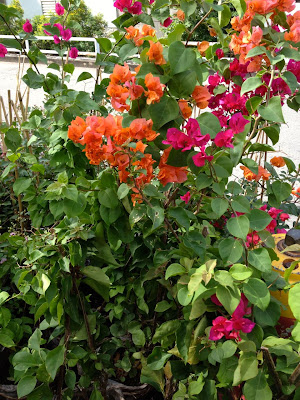 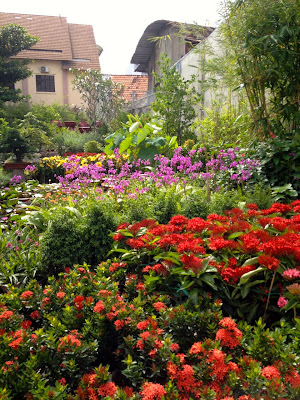 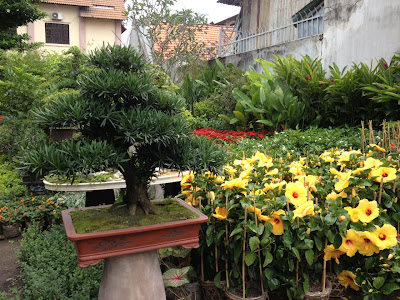 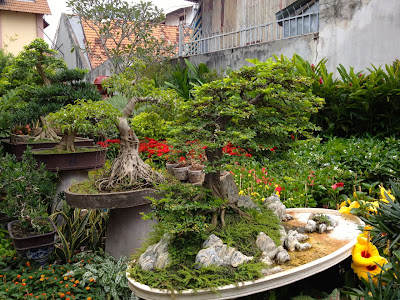 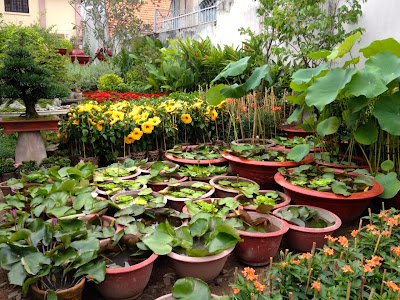 Speaking of house colour...any suggestions
on what colour pots I should put around the house, particularly,
the front window on the left?
Yes? No? Ok?
:) 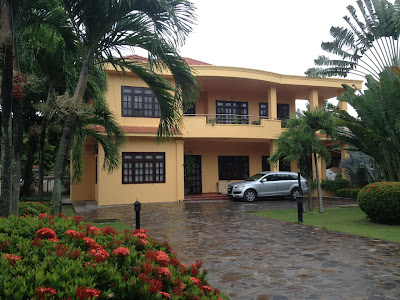 Just for fun...a woman on a mission.